The monument, designed by Giuseppe Poggi (architect, 1811-1901) within the enhancement plan of the city of Florence, when it became Capital of Italy (1865-1871), marks the center of the wide square, main junction of the Viale dei Colli. Therefore, the monument has to be considered in relationship with both its peculiar location and the near Loggia Caffè (1871-1873), a building designed by Poggi himself and originally conceived as a museum of Michelangelo’s originals and casts. The artwork stands on a wide stairway, with a high marble basement with bronze decorations, featuring four volutes on wich the so-called Michelangelo’s “Crepuscoli” lay (the statues of Night, Day, Dusk and Dawn from the Sacrestia Nuova in the church of San Lorenzo). At the top stands the bronze copy of David. The monument was designed by Poggi in order to celebrate Michelangelo, not just with a single figure, but with an assortment of copies of his creations. In 1872, Clemente Papi (sculptor, 1803-1875) cast the copies of Michelangelo’s“Crepuscoli”, on plaster moulds. In 1874 the bronzes were moved to the piazzale and the monument assembled as per design and completed by four slabs with inscriptions by Cesare Guasti (author, 1822-1889). The solemn inauguration was held on 13 September 1875.

The idea of reproducing Michelangelo’s famous monument in bronze was suggested to the Grand Duke Leopold II of Lorraine by the sculptor Lorenzo Bartolini, in order to replace the original in Piazza della Signoria, which needed a new, sheltered and safer arrangement. On 29 August 1840, the well-known sculptor and bronze artist Clemente Papi received, with a Royal Decree issued by the Grand Duke, the commission to make a plaster model of Michelangelo’s David in 1:1 scale, in order to replace the original one, that was supposed to be definitely moved to the renovated premises of the Academy. Papi worked hard on the statue for 18 months, but once the commission was completed, he realized that the Grand Duke lacked the initial enthusiasm, apparently under the negative influence of a very close person who would have perceived an unsatisfactory outcome of the enterprise. The chronicles of the time tell that Papi, his pride hurting, decided to prove his skill by casting in bronze, at his expense, only the head of David. The artwork aroused the admiration of the Florentines at the Exhibition of Industry and Manufacturing in 1854.

It is known from historical sources that Clemente Papi executed the bronze statues of the monument with a “dark and bright metal”. From the photographic documents available, we presume such feature lasted until the ‘40’s of the last century, but then, in the mid-1950s, it appears green, as it appears today. Main importance will have the study and categorization of decay’s effects, in relation with the remained original patina. In addition to tracing the cleaning, a scientific assessment, the primary aspect of a correct conservative intervention, will focus in detailing the metodology of the activity. Furthermore, the event will allow to verify, through a thorough endoscopic investigation, the current condition of the internal structure of the great David and validate the consistency of the rods bearing the four statues at the corners of the marble basement. It allowed to lift up and move them to a laboratory, in order to make restoration work more effective even on the stone surfaces of the basement. Skilled expertise for stone and metal will co-ordinate in order to carry out excellent work on a monument that, like others, presents big surfaces, outdated features due to the age it was cast in, and will, for the first time, undergo a scientific restoration. 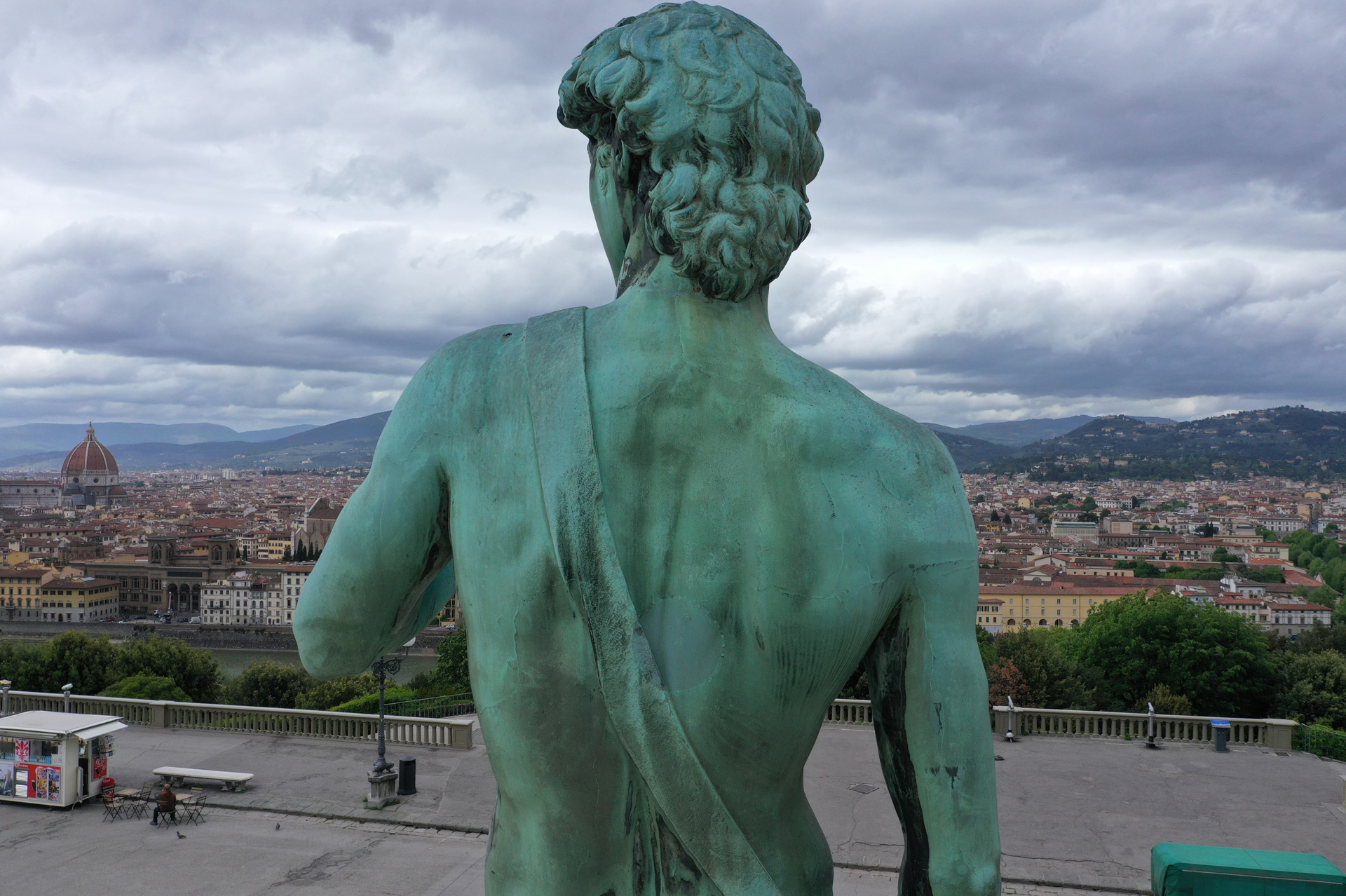 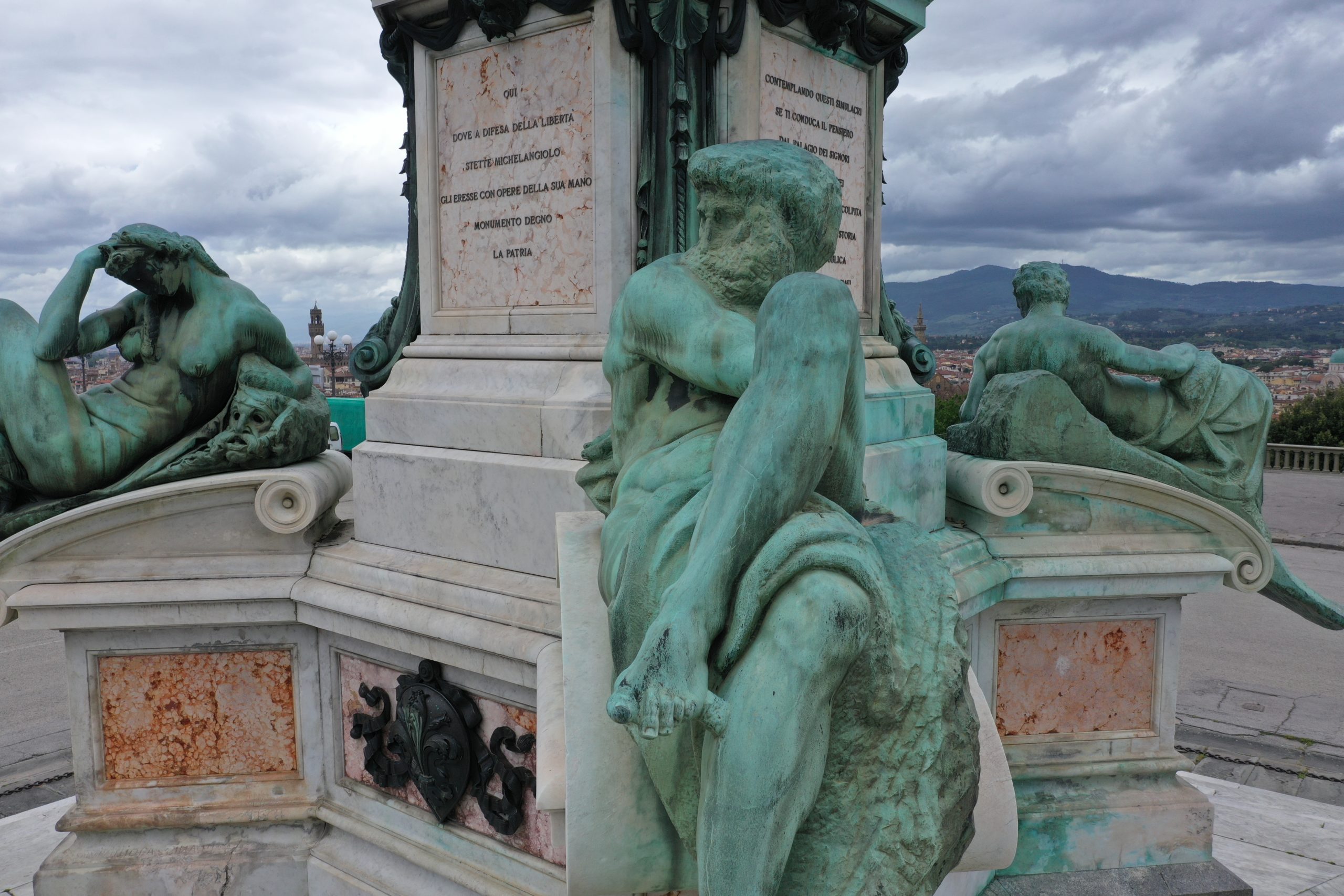 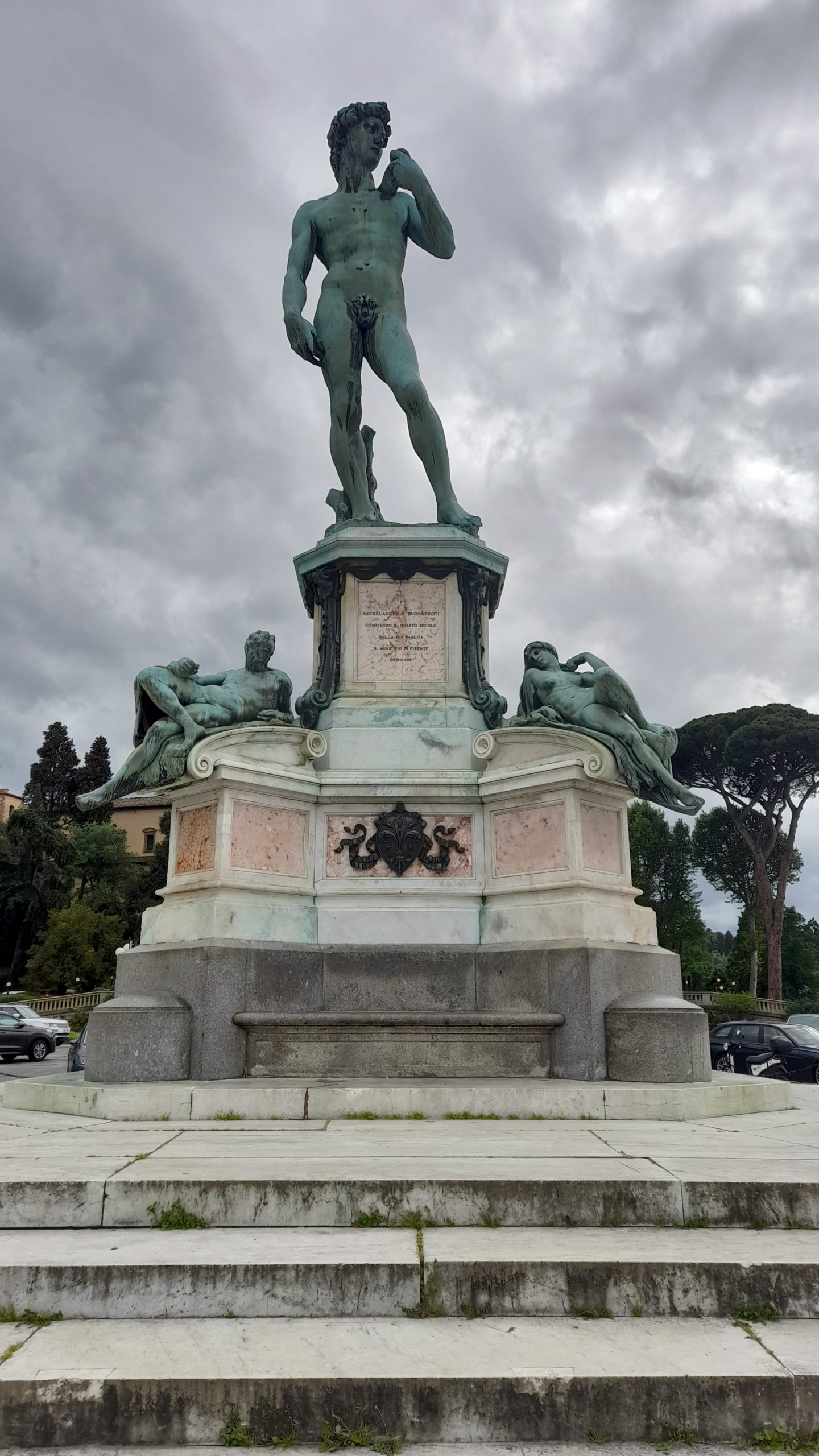 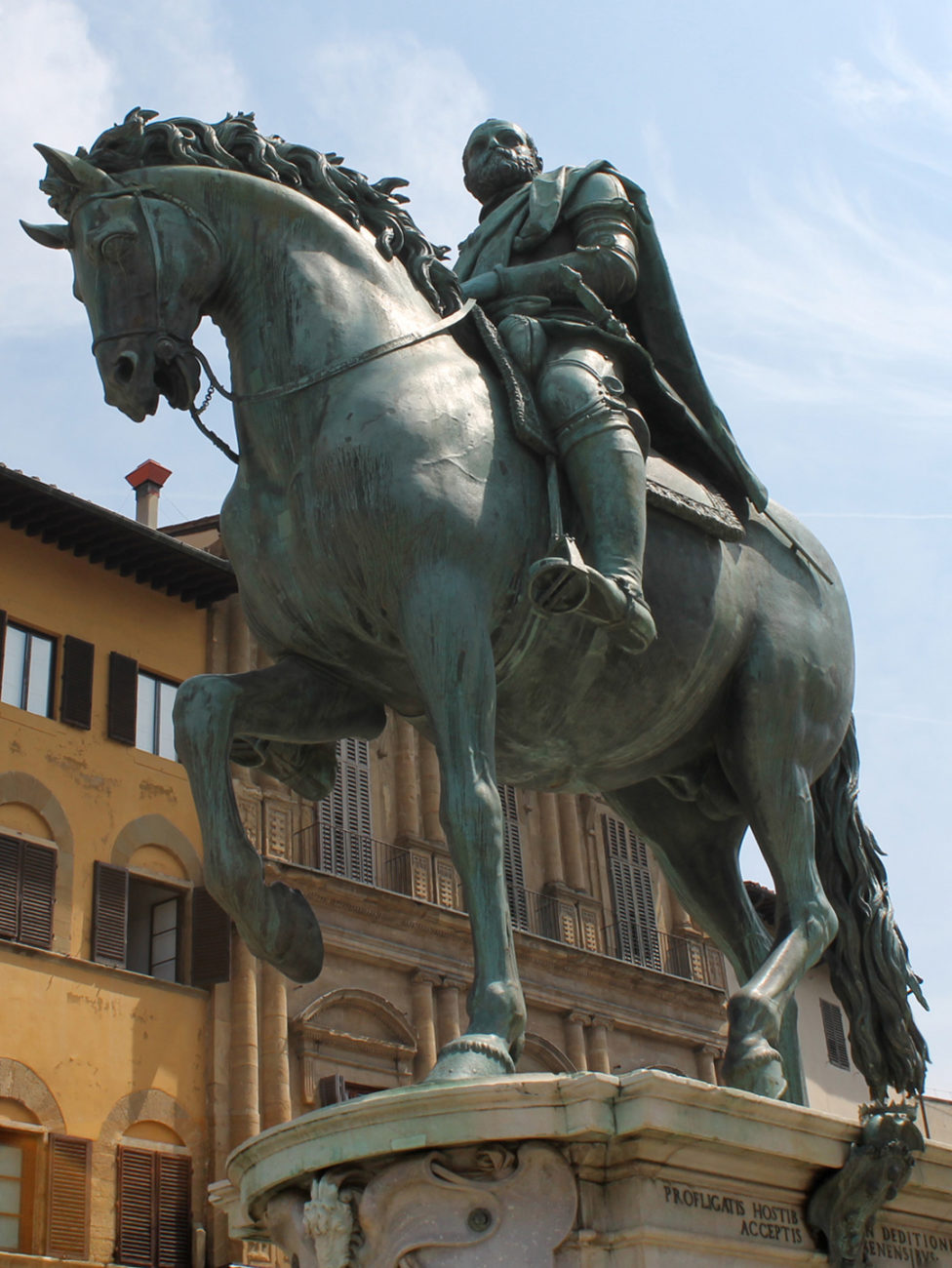 Equestrian statue of Cosimo I 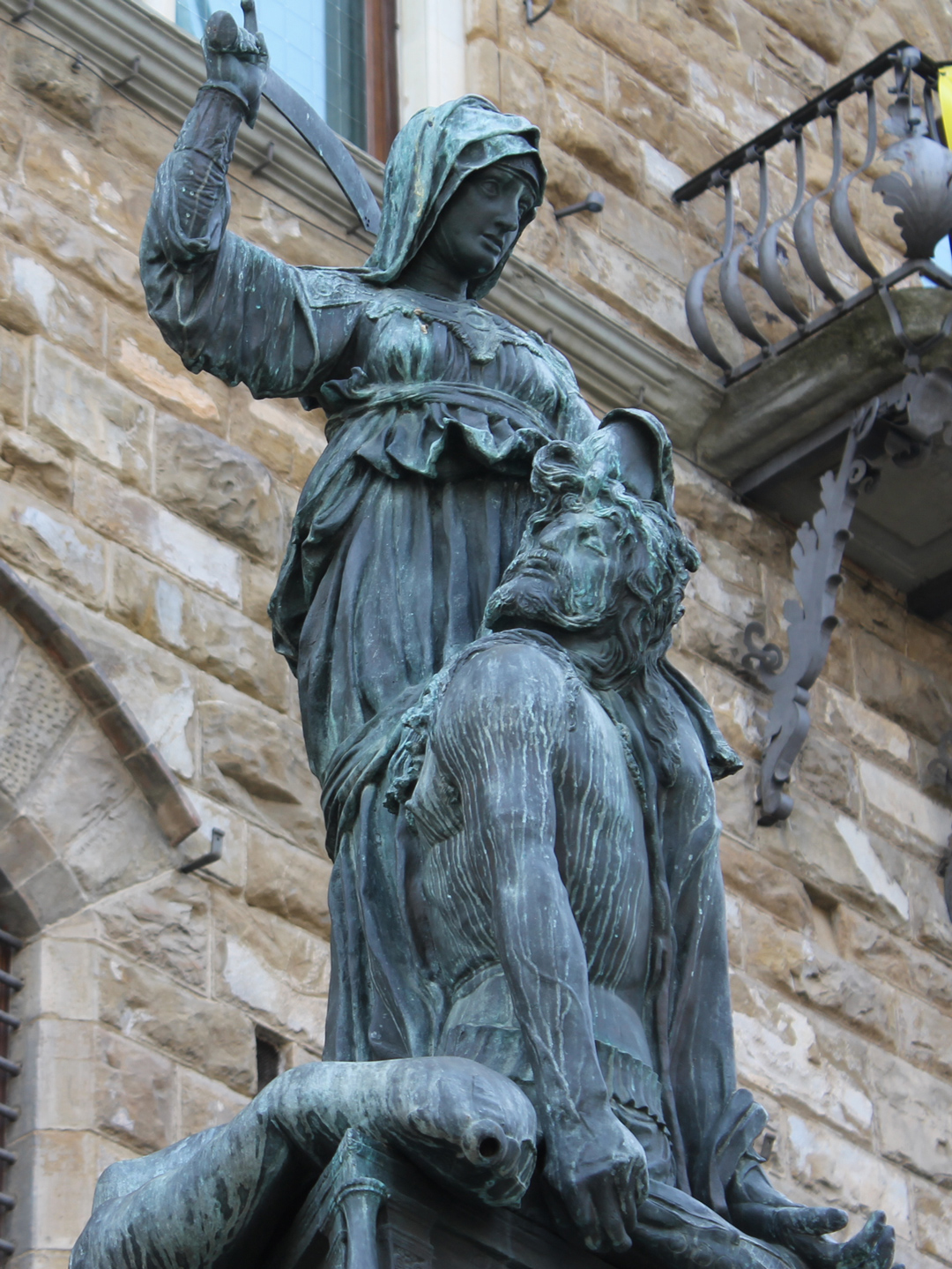 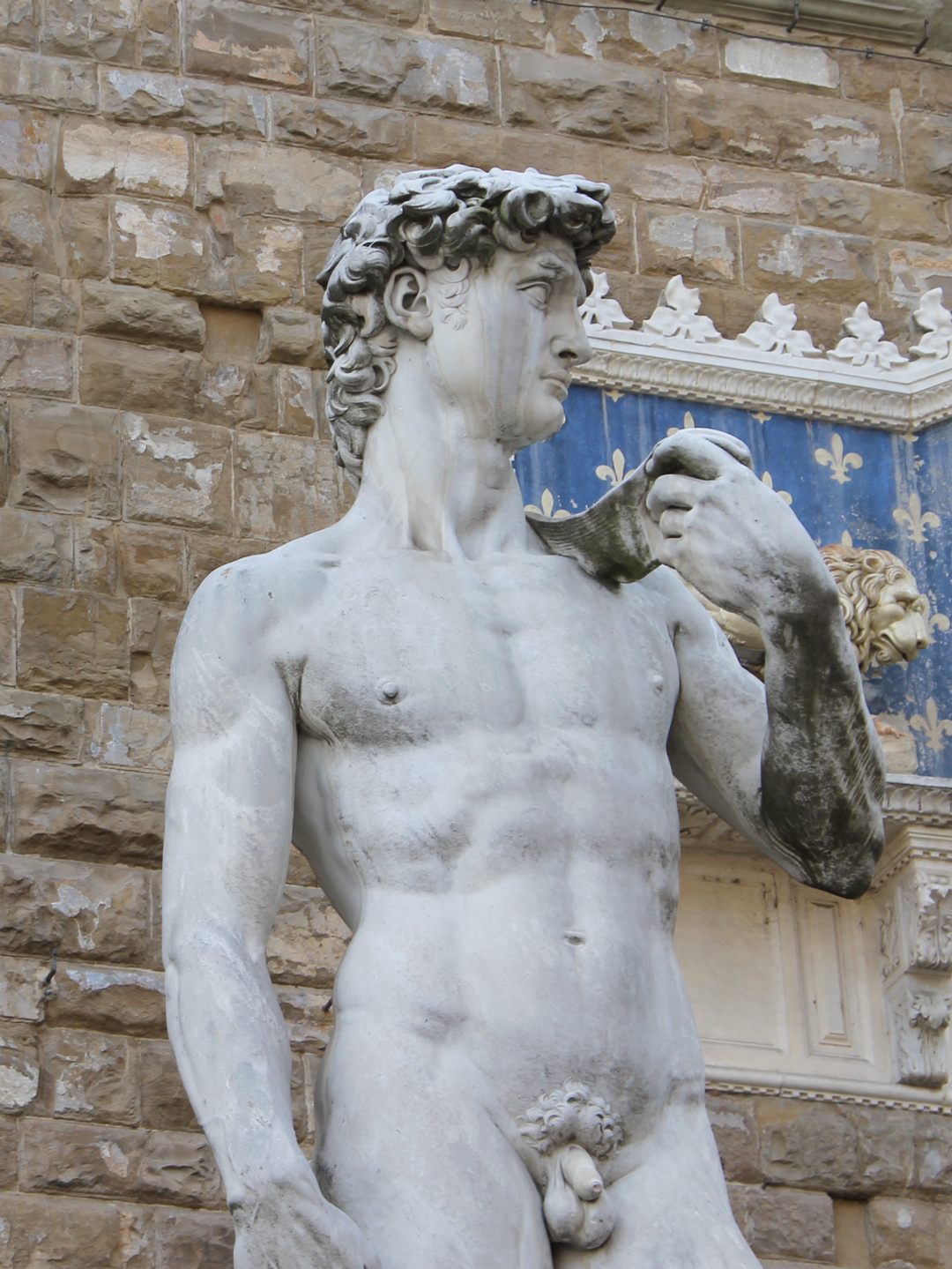 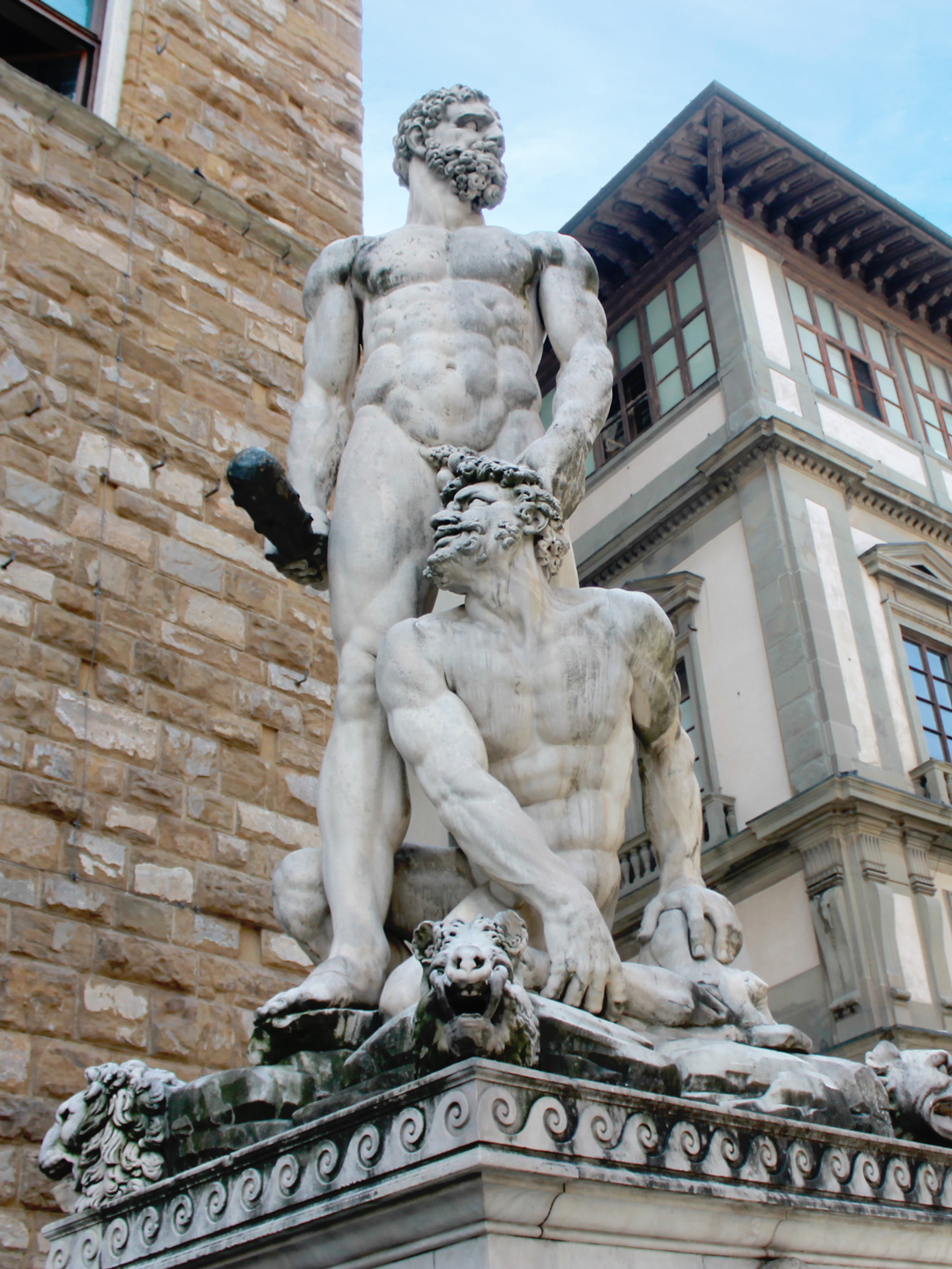 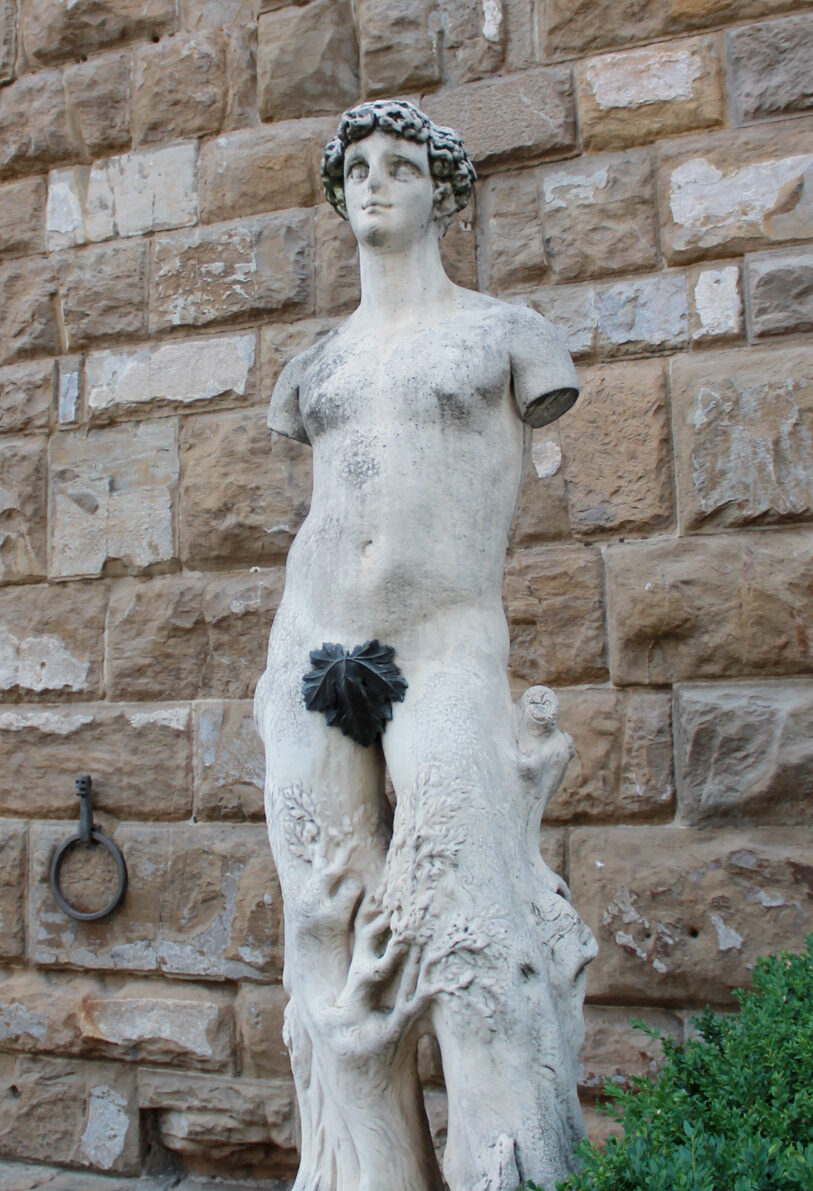